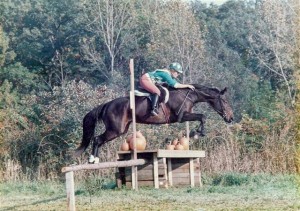 Wabbitt was the first horse I ever foaled and broke. I waited for 2 full months for him sleeping on a cot in the barn at Unzicker’s—even through a 3 day blizzard) as he arrived one month late of his due date. He was very small and weak; who would have ever thought he would become a 16-3H bully.

Raising Wabbitt turned out to be a challenge and I made every mistake in the book. The kind barn owner softly told me that a chain over the nose would be good when she saw my hanging from his mouth by my vest—and he also got gelded right away. Riding was a challenge too. He developed a rearing problem and would not move forward readily so with the help of a cowboy he never revisited that problem and it taught me a lot on how to handle the stubborn horse.

It took several events before he would ever actually get over the first XC fence but he was the best of jumpers. So safe to jump. He never ever had a rail down in stadium and he became a XC machine—he especially liked ditches and water jumps. He always knew when to move up to a fence or when to add a stride and he rarely listened to me as he was right most of the time. He did though have a bad habit of stopping first time out every event season in stadium. Once I had my photo in the Lexington news as I landed in a huge mud puddle after one of those episodes while Wabbit ran off with no hopes of getting stopped at the gate.  I jumped again that day with the eliminated riders but I was pretty dirty and he jumped perfectly. I had been in first place—Oh MY.

He had a stellar career in eventing and he won almost every training level event in area 4. But on his way to the next level he developed lameness issue which actually caused one of my worst horse accidents—he rolled over me when he tripped at the canter.

His sidebones prevented any other jumping so he moved on to concentrate on dressage. He was not the world’s best mover but made up for it on accuracy and did with much effort make it to fourth level and got one qualifying score which must have cost me thousands—all those lessons and attempts!

He retired due to lameness at 23 years of age.  My favorite attribute of Wabbitt’s was that he was always the herd leader. He never had a scratch on him and he never hurt another horse but he did bite a few. He kept the herd safe and monitored all horseplay. When he got too old for the big herd he went to the smaller group and bossed them around. He always gave me everything I asked of him—I was so very proud of him and loved him dearly—after 27 years and all the time we have spent together, it is just not the same without him.  Euthanized August 16, 2010 due to undetermined causes, but probably a tumor and subsequent infection. 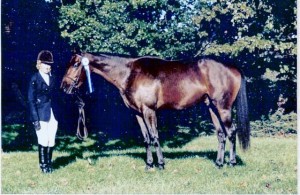 You are missed. RIP