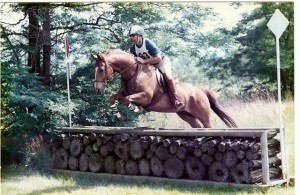 I first met Jade when he was 11 years old—I full leased him from White Horse Farm in Seymour and later went on to buy him. Jade had quite a reputation for being first of all an excellent horse—jumping and dressage, but he had a hidden weapon: one swift buck and you were off if you touched him behind the girth area. I believe as Sara Rhoades tells it, she used to goad cowboys who came to trail ride on her farm to ride him and then watch him buck them off—it was pretty fast as cowboys liked to wear spurs.  It took me about 3-4 months before the bucking dropped me when I was trying a lead change over a fence (you guessed it—pressure behind the girth).

He was such a willing guy—at our first show I had gotten up before dark to wash him and as I went to lead him toward the trailer he took off—I thought to roll and ruin everything but instead it was to run into the trailer and wait—he loved to go places. It was a start of a perfect love affair as he that day won 5 out of 5 classes we entered.  We together had great success at dressage, H/J and eventing (Area 4 Novice Champion 1988). There is nothing that horse could not do if he was braided. He was at his best in front of a crowd. He really was unbeatable.

I swear my husband married me so he could ride Jade. At one of Jade’s and Chuck’s first show, Chuck was new at it and missed a turn and ran Jade’s head into a jump standard. The next class Jade started over the first jump and then planted his feet and dumped Chuck right on the ground. Jade’s message was clear—At least steer!!! Chuck and Jade went on to do lots of H/J shows and events very successfully.

If you have not guessed by now Jade was the smartest horse I have yet to meet. He was a real thinker. He had such spirit in him to always do his best. He developed some lameness issues—his last event was at 27 years of age. He lost his vision several years ago and managed it so well.  He has been in my life for so many years. He is to be admired for his attitude and his abilities. Many people in this area knew of him. He was a legend. It is just so sad to not have him here. He was put down due to complications of laminitis. We miss him. He had a great life that he deserved. Love you Jade. RIP

This photo was actually taken in 2010 — my camera date is not correct!