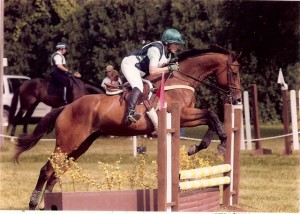 Maverick came to me via California sight unseen from my dressage coach Tom Valter to retire to a trail riding home at 14 years of age. He arrived in the middle on the night on a huge van and he was gorgeous!!!! He flunked his vet check so he was not sold and that was the best thing ever for me!!! He stayed sound throughout his 13 years here and he and I just clicked together. He was a little spirited but obedient.

He supposedly did not jump but had great dressage training. He was a good trail horse but did (slowly cantering almost in place) run home with me the first time out. He turned out to be an incredible jumper after all—he just needed to be held together as a spring and he could jump anything as long as it was not grids! With his previous dressage training and his willingness to learn new things he became a successful eventer. It was always a joy to take him to an event. He was truly a gentleman and a consistent competitor. He won many events at novice level. He ended up having a very scopey jump and could get you out of trouble with ease if you had the spring.

It was truly a joy to just canter him as he had an uphill canter and loved to do it. He rarely shied so the park trail riding was perfect.  He had two fantastic leasers in his golden years—Shawn and Mary.  Shawn evented him with great success and although Shawn was a great jumper already, he taught her dressage.  Mary enjoyed peaceful dusk trail rides and cantering in the park in the evenings.

In 2010, he developed rapidly inflammatory arthritis in his neck. It came on rather suddenly and he had three bad bouts of it. The third bout seemed to put pressure on his motor nerves and his gait became unsteady and he fell easily. We euthanized him on October 7.  Ellwood—his very best friend in the horse world, 27 himself—missed him terribly.

We too miss Mav’s elegance and quiet demeanor. He was a wonderful California boy—we were so glad to have him. He was not just a pretty face. RIP 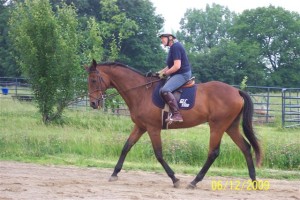