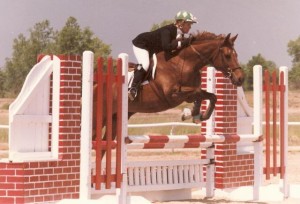 Born on our farm in 1987, Arriba had a rough start.  She developed naval ill  in her right hock, and was given lots of antibiotics in her first two years of life.  My plan was to sell her, but it was discovered she had arthiritis in her hock, so no one would buy her.   It turned out that it was the best thing ever, because she was never been lame on her hock and won almost everything she tried to do for the last twenty years!

She was an amazing horse to train.  She tied and lead the first time I tried.   At her first hunter show, I asked her to do some limited jumping over small cross rails.  She literally asked me to jump a red flower jump.   I thought, why not?  We went on to win several hunter classes that day.  Never arguing, she has always done everything that has been asked of her.

Arriba was a lovely jumper with numerous wins in the hunter/jumper arena.  She also excelled as a dressage horse.  Leased to a Pony Clubber for two years, she ended up fifth in the nation in Pony Club training level dressage. Not just a pretty face, she also had a very successful career in eventing, winning the Area 4 Novice Champion award in eventing in 1998. 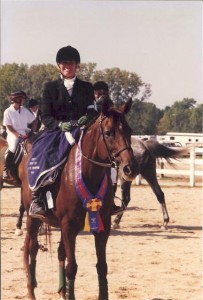 In 2007, the horse I was showing at the time injured himself before a combined training show.   I was confident that Arriba could substitute as my entry.  At age 20, she won second and first in her division, tackling the work with ease and running all over the cross country course!

She was a wonderful lesson horse and was my most reliable horse for beginning riders on the trail.

About the only thing Arriba did not like was cows!

In 2012, she came into hard times when she had an acute onset of primary glaucoma.  It has been a very long arduous trip for her full of hurtfulness and treatments three to four times daily. She had surgery twice to help her lower her eye pressure.

Unfortunately as a result of her illness she lost sight in one eye.  After a frightening bout with laminitis (probably resulting from the medication) she was able to finally get back outside half time.

In late summer Arriba finally went blind. She adjusted poorly to it I think. She managed as she usually would and try but she seemed afraid. She had a pasture accident  February 8th–bitter cold and leg broken. She was such a wonderful horse–she never complained, had great joy in her work, had very successful career, gave me Earl and had many who loved and cared about her. We find it very hard to be without her after 27 years.  RIP.